Henri Cartier-Bresson was born in 1908 and died in 2004. His work is an essential, attentive testimony to the political and social events that marked the 20th century. He was one of the mythical photographers of that century.

He was a pioneers of photojournalism and the co-founder of the Magnum Photos agency. HCB, as he was known, acquired international fame thanks to the black and white photographs he took with his Leica camera.

HCB managed to capture a whole host of snapshots of the most relevant historic events of the 20th century, right through to faces of anonymous people, paying witness to the human condition and the times.

History with a capital H, that of the towns he photographed during the Spanish Civil War, the Liberation of Paris, the first months of the People’s Republic of China and of the USSR, including Gandhi’s India. Or history written in small letters, that of anonymous men and women whom he immortalised in everyday poses on the banks of the River Marne, in Seville, Barcelona or Madrid.

He completed the chronicle of the 20th century with illustrated portraits. As an example, we would mention the painter Matisse, the philosopher Jean-Paul Sartre and the man-and-wife team of scientists, Irène and Frédéric Joliot-Curie.

He himself said that “To photograph, it is to put on the same line of sight the head, the eye and the heart.”

Part of his work can be seen in this exhibition at the Museu del Tabac. 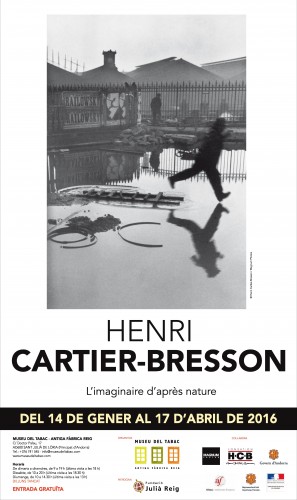