In December 1938, the British magazine Picture Post published images of the Spanish Civil War taken by Robert Capa and proclaimed him “The Greatest War Photographer in the World.” His images capture, with ingenuity, the joys of peace.

War photographs remained at the very heart of his work. Besides documenting the Spanish Civil War (1936–39), Capa photographed the resistance to the Japanese invasion in China during 1938, and later went on to cover the European scene from World War II (1941–45), the First Arab-Israeli War (1948), and the French Indochina War (1954). In May 1954 Capa stepped on an anti-personnel mine and was killed. He was forty years old.

Capa is best known for his so-close-you-can-feel-the-ground-
shake photographs of battle, but the other side of his coverage of war documents the suffering of innocent civilians, especially children. Capa was present as bombs were dropped around the world, but he rarely photographed the dead or the seriously injured. Instead, he focused on the survivors going about their daily lives despite overwhelming losses and staggering destruction. It may be said that the great theme of Capa’s war photographs is the triumph of the human spirit over the most terrible adversity.

Robert Capa was one of the finest war photographers, but he also took portrait shots of several famous people and you can find the resulting photographs in this exhibition. 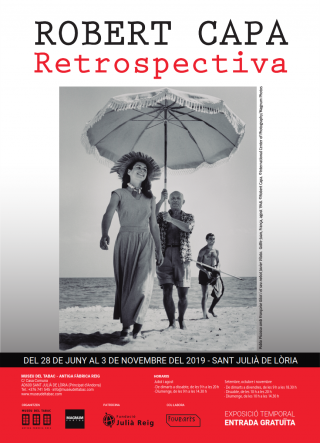